In 1642, the year he entered the Royal Council, Mazarin decided to move into the Hôtel de Chevry-Tubeuf, located near the Palais Royal where the

regent, Anne of Austria, and the young Louis XIV were living. He ordered major extensions and refurbishment and in 1644 commissioned François Mansart to build the upper and lower galleries for his art collections. Gabriel Naudé had entered his service at the end of 1642 and had begun to design and develop the largest and most beautiful library that Europe had ever known. In 1646, the architects Pierre Le Muet and Maurizio Valperga were commissioned to design a building along the rue de Richelieu to accommodate the Cardinal's stables on the ground floor and his library upstairs. It had an extraordinary gallery with eight large windows facing east, wood panelling and shelves up to the ceiling. This modern model of library organisation, first conceived at El Escorial in the sixteenth century, was probably suggested to Mazarin and Naudé by the Barberini library in Rome. The lower part of the great gallery had a set of shelves for large formats below a desk at waist height extending right around the room. The wall between the windows, adorned with fifty-four fluted columns, supported a balcony. Mazarin's monogram and coat of arms graced the balcony railings and the gallery's sculpted wooden decor. The dispersal of the cardinal's books by public auction at the beginning of 1652 – during the Fronde – temporarily emptied this sumptuous hall.

Although Mazarin's art collections were dispersed after his death (9 March 1661), his library stayed intact. Under the arrangements the Cardinal made in his will a few days before he died (6 March), but which had long been on his mind, the library was to be opened to the public and attached to the college to be founded in his memory.

The council mandated to found the college, which included Jean-Baptiste Colbert and Michel Le Tellier, considered several possible sites for the new establishment. The King's architect Louis Le Vau (1612-1670) suggested the site which was eventually chosen, on the fringe of the Latin quarter, across the river from the Louvre. The Porte de Nesle, one of the old city gates, had to be demolished to make way for it. Le Vau's first plans and elevations date from 1662. The building, which harmoniously combined the heritage of Italian baroque and the new ambitions of French classicism,

was laid out on either side of the college chapel. The Cardinal's cenotaph was to be built in the chapel. From the outset, the left wing was reserved for the library. Le Vau's design was not rectangular, like the library in the Palais Mazarin, but brought two galleries together at right angles. Construction took over twenty years and was supervised after the death of Le Vau (1670) by François d'Orbay, who designed the chapel dome. Once the library pavilion was finished, the books were transferred to the college buildings and the sumptuous decoration from the gallery in the rue de Richelieu – columns, pedestals, capitals, shelves and wood panelling – was fitted into the new space. The Mazarine Library actively renewed its function as a public library, welcoming its first readers in 1689.

Major alterations have been made to the library building twice since then. Le Vau's vaulted galleries showed signs of strain in the early eighteenth century, so a ceiling was built in 1739-1740, which increased storage capacity above the balcony. In 1824, the architect Léon Biet, under the

supervision of Antoine Vaudoyer, built a grand staircase in a neoclassical style, which fitted into an oval drum with overhead lighting, crowned by a gallery adorned with antique busts.

Numerous artworks were added to the collection in the late eighteenth and early nineteenth centuries: marble, bronze or terracotta busts of Roman emperors, ancient authors or seventeenth- and eighteenth-century scholars now decorate the entrance to the library and the reading room; the small gallery is lit by two remarkable rococo chandeliers of chased gilt bronze, attributed to Jean-Jacques Caffieri, which once belonged to the marquise de Pompadour ; among the ornaments of the large gallery are a celestial globe by Coronelli, with a copper meridian by Gatellier (1693), and a terracotta sculpture by Clodion (1738-1814) showing the poet, Arion, saved from drowning by a dolphin. 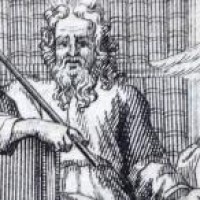