The Mazarine Library originated in the private collections of Cardinal Mazarin (1602-1661), Richelieu's successor and prime minister during Louis XIV's minority between 1643 and 1661. The library in Mazarin's mansion (which later became the historic site of the Bibliothèque nationale de France) was opened to scholars in 1643, making the Mazarine France's oldest public library.

It was organised and extended by Gabriel Naudé (1600-1653), who in 1627 published the first treatise of modern library management (Advis pour dresser une bibliothèque). He built up the richest private library in Europe, making use of the considerable resources at his disposal: he bought up booksellers' collections or acquired complete libraries (such as that of Canon Jean Descordes in 1643), prospected for books abroad and went through diplomatic or military channels. By the mid seventeenth century the collection approached 40,000 volumes. During the Fronde (1648-1652), when Mazarin fled Paris and his property was confiscated, this first library was dispersed in a public auction at the beginning of 1652. Back in power, Mazarin pieced part of it together again with the help of Naudé's successor, François de La Poterie. As a protective measure, he decided to attach it to the Collège des Quatre-Nations, a school he founded shortly before he died for the education of sixty young men from the four provinces annexed to the kingdom of France during his government (Alsace, Flanders, Roussillon and Pignerol).

Amputated of its manuscripts, which were exchanged with the royal library in 1668, the collection was transferred to the grandiose building designed by Louis Le Vau for the Collège des Quatre-Nations. Reopened in 1689, the Mazarine Library continued to operate throughout the Revolution because it was public, while the college itself was closed down. Its librarian, Abbé Gaspard Michel, called Leblond, worked hard to channel books confiscated during the Revolution into the library's collections. Several thousand volumes came from aristocratic or monastery libraries (Notre Dame Cathedral, St Victor abbey, the abbey of Saint Germain des Prés, the Jacobin convent in the rue Saint Honoré, etc.), and from conquered territories. In this way the Library built up a remarkable collection of manuscripts.

Since then its resources have steadily grown, with collection development focused on the historical disciplines. It receives books through the legal deposit and benefits from some substantial donations. Attached in 1945 to the Institut de France, which has occupied the buildings of the former Collège des Quatre-Nations since 1805, the Mazarine is included among the libraries of major literary and scientific institutions under the aegis of the Ministry of Higher Education and Research. Its reading room, restored in 1968-1974, perpetuates the style of a great seventeenth-century library. More than 350 years after its foundation, the Mazarine Library is a veritable museum of the book and a study and research library and it is still open to all. 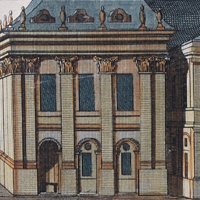