The Armenian culture produced numerous manuscripts, the earliest dating to the sixth century, and began to use typographic techniques in the early sixteenth century. The first book printed in Armenian was published in Venice in 1512; it is the work of an enigmatic figure, Yakob (Jacob), nicknamed "the sinner," who published only five books before vanishing without trace. On the five hundredth anniversary of the beginning of Armenian printing, the Mazarine Library, in partnership with BULAC, exhibits a little known corpus of rare, valuable Armenian books, most from princely, monastic or scholarly libraries under the Ancien Régime.

The exhibition shows how widely scattered Armenian printing was in the early centuries (Venice, Rome, Constantinople, Amsterdam, Marseilles, Madras...), and the often difficult conditions in which the Armenians worked, whether they were printers, publishers, patrons, engravers or bookbinders. Special attention is paid to the privileged repertories of ancient publishing (grammar books and alphabets, scriptures, history), its ornamental features (bird-shaped initial letters, illustration combining borrowings from European artists and traditional iconography), and book bindings. Deeply involved in the rivalry between the Armenian Church and Rome, revealing the ambiguous relationship between classical and vernacular languages, a vector of the identity of a stateless nation, whose members roamed the entire world, the Armenian book sheds light on the intellectual, technical, political and commercial exchanges between Europe and the East from the Renaissance to the Enlightenment.

An exhibition organised by the Bibliothèque Mazarine, in collaboration with BULAC and with the support of the Calouste Gulbenkian Foundation (Lisbon). 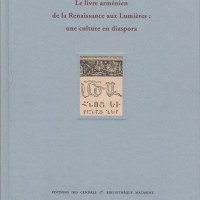