Since late Middle Ages, many revolts and uprising events have marked European History. For a long time, historians have been thinking that due to the extent of illiteracy, opponents had very few means of self-expression. However, the increase and widespread of contesting images during periods of insurgency provides evidence of a visual and popular culture, existing long before the French Revolution. Significant examples can be observed during the Bohemian Hussits movement in the 15th century, or during the Peasants War in the Holy Roman Empire (1525).
A complex imagery of revolts emerges and spreads. Especially on short-lived and scarcely preserved materials, but also in manuscripts, and very soon on new media: opponents express their discontent with printed pamphlets and prints. In return, challenged authorities tries to contain seditious images dissemination, and to display their self legitimacy by publishing other motives. This visual production arouse many questions. How rebels influence their creation? How technical innovations (printing) or spiritual ones (reformation, iconoclasm...) could have determined their spread, form and content? Can historians trust them ?

The exhibition features a broad variety of images, from rebellions of Flemish cities in the 14th century, to peasants revolts and religious troubles of 15th and 16th centuries, uprisings and revolutions in mid-17th century (in France, Portugal, Naples, the British islands), Jansenist protests in 18th century etc. They form an unknown and astonishing visual legacy and a key testimony to understand political culture of Europe.

An exhibition organised by the Bibliothèque Mazarine, in collaboration with the ANR project Culture des révoltes et révolutions 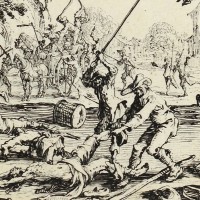